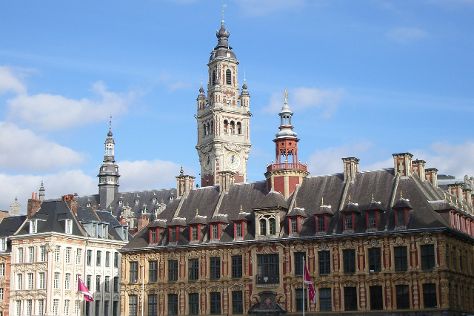 On the Deûle River near the Belgium border, Lille has a very active cultural life as France's fifth-largest metropolitan area and the fourth-largest urban area with a large college student population.

Start off your visit on the 13th (Fri): test your problem-solving skills at popular escape rooms, admire the striking features of Old Stock Exchange, pause for some serene contemplation at Cathedrale de la Treille, then take a stroll through Vieux-Lille, and finally explore the world behind art at Le Palais Des Beaux Arts de Lille.

To see traveler tips, other places to visit, ratings, and other tourist information, go to the Lille journey builder app.

If you are flying in from Australia, the closest major aiports are Charles de Gaulle International Airport, Lille-Lesquin Airport and Paris Beauvais Tillé Airport. Expect a daytime high around 9°C in December, and nighttime lows around 3°C. Cap off your sightseeing on the 13th (Fri) early enough to travel back home.
more less

Things to do in Lille