Vienna is known for historic sites, museums, and nightlife. Your plan includes some of its best attractions: admire the striking features of Schonbrunn Palace, learn about wildlife with up-close encounters at Schönbrunn Zoo, take in the architecture and atmosphere at St. Stephen's Cathedral, and see the interesting displays at The Hofburg.

For ratings, photos, other places to visit, and other tourist information, refer to the Vienna planning tool .

Barcelona, Spain to Vienna is an approximately 5.5-hour flight. You can also do a combination of flight and bus; or drive. Expect a bit cooler evenings in Vienna when traveling from Barcelona in August, with lows around 18°C. Wrap up your sightseeing on the 5th (Wed) early enough to travel to Salzburg.
more less

With six universities, Graz represents a young, laid-back, and lively city with nightlife that doesn't stop.

Step out of Graz with an excursion to Red Bull Ring in Spielberg--about 1h 10 min away. The adventure continues: stroll around Schlossberg, look for gifts at Island in the Mur, don't miss a visit to Hauptplatz, and admire the landmark architecture of Gemaltes Haus.

To find other places to visit, photos, traveler tips, and other tourist information, refer to the Graz day trip planner .

Drive from Vienna to Graz in 2 hours. Alternatively, you can take a bus; or fly. In August, plan for daily highs up to 30°C, and evening lows to 16°C. Finish your sightseeing early on the 8th (Sat) to allow enough time to drive to Salzburg.
more less

Things to do in Graz 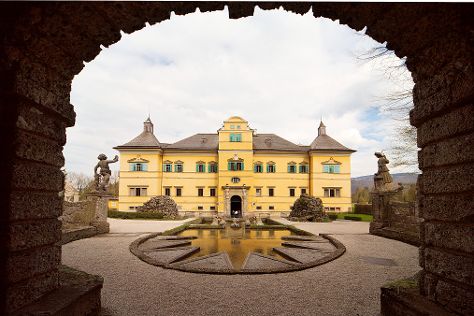 Rome of the North

Explore the numerous day-trip ideas around Salzburg: Swarovski Kristallwelten (in Wattens) and Grossglockner High Alpine Road (in Heiligenblut). And it doesn't end there: admire the landmark architecture of Fortress Hohensalzburg, contemplate in the serene atmosphere at Nonnberg Convent, take an in-depth tour of Mozarts Geburtshaus, and steep yourself in history at Mozart Residence (Mozart Wohnhaus).

To find photos, other places to visit, maps, and tourist information, read our Salzburg trip planner .

Getting from Graz to Salzburg by car takes about 3 hours. Other options: take a bus; or take a train. In August, daytime highs in Salzburg are 28°C, while nighttime lows are 16°C. Finish your sightseeing early on the 12th (Wed) to allow enough time to drive back home.
more less

Things to do in Salzburg