You'll visit kid-friendly attractions like Basilica of the Sagrada Familia and Parc Guell. The adventure continues: admire the landmark architecture of Casa Batllo, steep yourself in history at Basilica de Santa Maria del Mar, pause for some serene contemplation at Barcelona Cathedral, and enjoy the sand and surf at Playa de La Barceloneta.

Plan a trip to Barcelona easily and quickly by telling Inspirock to suggest an itinerary.

Dubai, United Arab Emirates to Barcelona is an approximately 10-hour flight. The time zone difference moving from Gulf Standard Time to Central European Standard Time is minus 3 hours. Traveling from Dubai in December, things will get much colder in Barcelona: highs are around 17°C and lows about 7°C. Finish your sightseeing early on the 26th (Wed) to allow enough time to travel to Granada.
more less

Kick off your visit on the 27th (Thu): look for gifts at Munira Leather, take in nature's colorful creations at Generalife, then get a taste of the local shopping with Galeria Fotografica, and finally step into the grandiose world of Alhambra.

To find other places to visit, reviews, traveler tips, and tourist information, refer to the Granada trip itinerary builder tool.

Fly from Barcelona to Granada in 4.5 hours. Alternatively, you can take a train; or drive. Traveling from Barcelona in December, plan for a bit cooler nights in Granada, with lows around 2°C. Finish your sightseeing early on the 27th (Thu) so you can drive to Ronda.
more less 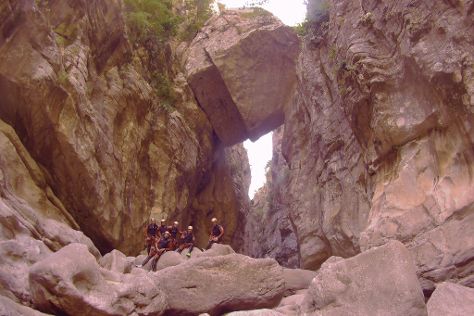 Ronda is known for historic sites, nature, and museums. Your plan includes some of its best attractions: identify plant and animal life at Reservatauro Ronda, hit the best photo ops around with an inspiring photography tour, visit La Ciudad, and take in the views from Puente Nuevo.

Make your Ronda itinerary with Inspirock to find out what to see and where to go.

You can drive from Granada to Ronda in 2.5 hours. Alternatively, you can take a train; or take a bus. Traveling from Granada in December, plan for somewhat warmer nights in Ronda, with lows around 7°C. Finish up your sightseeing early on the 30th (Sun) so you can go by car to Seville.
more less

To see traveler tips, other places to visit, more things to do, and tourist information, use the Seville journey maker tool.

Getting from Ronda to Seville by car takes about 2 hours. Other options: take a bus; or take a train. December in Seville sees daily highs of 19°C and lows of 8°C at night. Finish your sightseeing early on the 31st (Mon) so you can travel to Madrid.
more less

Kids will enjoy Prado National Museum and Parque del Retiro. Next up on the itinerary: admire the striking features of Royal Palace of Madrid, make a trip to Puerta del Sol, see the interesting displays at Museo Nacional Thyssen-Bornemisza, and steep yourself in history at Plaza Mayor.

To see ratings, where to stay, other places to visit, and other tourist information, use the Madrid road trip website.

You can fly from Seville to Madrid in 3.5 hours. Alternatively, you can take a train; or drive. Prepare for little chillier weather when traveling from Seville in December: high temperatures in Madrid hover around 14°C and lows are around 3°C. Wrap up your sightseeing on the 3rd (Thu) to allow time to travel back home.
more less