If you are flying in from Australia, the closest major aiports are Lille-Lesquin Airport, Paris Beauvais Tillé Airport and Deauville-Saint-Gatien Airport. In July in Boulogne-sur-Mer, expect temperatures between 24°C during the day and 16°C at night. Finish your sightseeing early on the 13th (Sat) to allow enough time to drive to Wissant.
more less

Things to do in Boulogne-sur-Mer 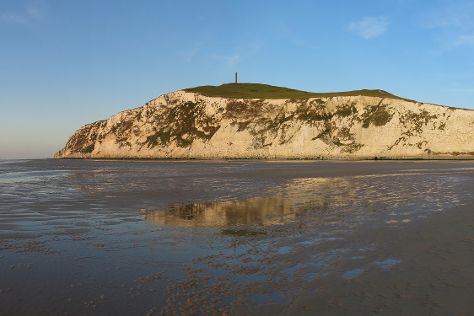 ©
Wissant is a seaside commune in the Pas-de-Calais department in the Hauts-de-France region of France.GeographyWissant is a fishing port and farming village located approximately 18km north of Boulogne, 16km west-southwest of Calais, 36km southeast of Dover, 53km west-southwest of Dunkirk, 66km from the Belgian coast, 191km north of Le Havre, 523km northeast of Brest, and 231km north of Paris, at the junction of the D238 and the D940 roads, on the English Channel coast.HistoryLocated at the eastern end of a lagoon formed by a storm-breach of the coastal dunes, probably in the mid-10th century, Wissant has been a fishing village for a millennium: along with Audresselles it is the last fishing village in France to use a traditional method of fishing using a wooden boat called a flobart and was in the Middle Ages a major port for embarkation for England: In a mid-11th century Life of St. Your day by day itinerary now includes Wissant Beach. Kick off your visit on the 14th (Sun): explore the striking landscape at Cap Blanc-Nez and then enjoy the sand and surf at Wissant Beach. On your second day here, find something for the whole family at Parc Saint Joseph Village, see the interesting displays at Musee du Mur de l'Atlantique, and then get outside with Cap Gris Nez.

To see other places to visit, reviews, more things to do, and more tourist information, you can read our Wissant online attractions planner.

Wissant is very close to Boulogne-sur-Mer. July in Wissant sees daily highs of 24°C and lows of 16°C at night. Wrap up your sightseeing by early afternoon on the 16th (Tue) to allow time for the car ride to Pierrefonds.
more less

Things to do in Wissant

©
Kick off your visit on the 16th (Tue): pause for some serene contemplation at Eglise Saint-Sulpice Pierrefonds. Keep things going the next day: take an in-depth tour of Caverne du Dragon, then steep yourself in history at Abbaye Saint-Jean-des-Vignes, then pause for some serene contemplation at Cathedrale Saint-Gervais Saint-Protais, and finally step into the grandiose world of Chateau de Pierrefonds.

For more things to do, ratings, other places to visit, and other tourist information, you can read our Pierrefonds day trip website.

Traveling by car from Wissant to Pierrefonds takes 3 hours. Alternatively, you can do a combination of taxi, train, and bus. In July in Pierrefonds, expect temperatures between 28°C during the day and 15°C at night. You will have some time to spend on the 19th (Fri) before leaving for home.
more less

Things to do in Pierrefonds