The capital of Vietnam, Hanoi has bounded back from the effects of war, and today serves as a bustling commercial and cultural hub bursting at the seams.

Kick off your visit on the 8th (Wed): view the masterpieces at TiredCity Hang Bong, thenexplore the activities along Lake of the Restored Sword (Hoan Kiem Lake), and then visit Old Quarter. Here are some ideas for day two: make a trip to Ho Van - Van Mieu, thencontemplate the long history of Temple of Literature & National University, and then get the lay of the land with Walking tours.

For where to stay, more things to do, ratings, and tourist information, use the Hanoi tour planner.

Copenhagen, Denmark to Hanoi is an approximately 18.5-hour flight. You'll lose 6 hours traveling from Copenhagen to Hanoi due to the time zone difference. Finish your sightseeing early on the 9th (Thu) so you can take a bus to Halong Bay.
more less

Things to do in Hanoi 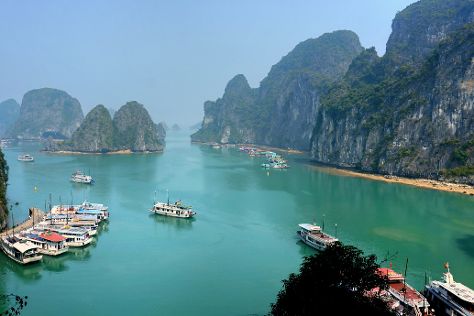 Halong Bay encompasses a cluster of verdant limestone islets that jut out from the sea and make up an enchanting setting recognized as a World Heritage Site.

Kick off your visit on the 10th (Fri): contemplate the waterfront views at Bai Tu Long Bay and then explore the activities along Hạ Long Bay. Here are some ideas for day two: head off the coast to Hon Ga Choi Island, take a tour by water with Boat Tours & Water Sports, and then snap pictures at Pont Bai Chay.

To see where to stay, other places to visit, and other tourist information, read Halong Bay vacation planner.

Things to do in Halong Bay

Nestled on the banks of the Perfume River, the city of Hue remains most famous as the former home of the Nguyen Dynasty, the influence of which remains evident in local palaces, temples, forts, and museums.

To see traveler tips, maps, more things to do, and more tourist information, go to the Hue trip builder.

You can fly from Halong Bay to Hue in 7.5 hours. Alternatively, you can do a combination of bus and train; or take a bus. In April in Hue, expect temperatures between 37°C during the day and 26°C at night. Wrap up your sightseeing on the 13th (Mon) early enough to drive to Hoi An.
more less

Things to do in Hue 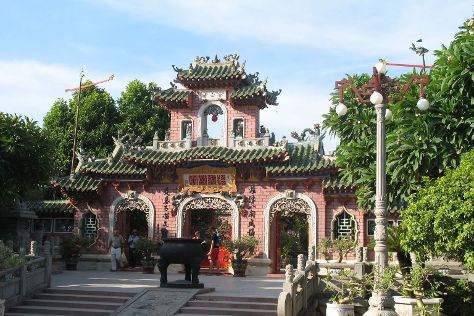 Indisputably one of Vietnam's most atmospheric destinations, Hoi An contains a World Heritage-listed old town boasting over 2,000 years of culture and history.

Explore Hoi An's surroundings by going to Da Nang (Dragon Bridge & Lady Buddha). There's much more to do: relax and rejuvenate at some of the best spas, make a trip to Hoi An Ancient Town, indulge in some culinary diversions at a local gastronomic tour, and snap pictures at Japanese Covered Bridge.

To see photos, reviews, ratings, and other tourist information, refer to the Hoi An online tour itinerary builder.

You can drive from Hue to Hoi An in 3 hours. Alternatively, you can do a combination of train and taxi; or take a bus. Expect a daytime high around 36°C in April, and nighttime lows around 28°C. Wrap up your sightseeing on the 16th (Thu) early enough to travel to An Thoi.
more less

Things to do in Hoi An

©
An Thoi is known for beaches, theme parks, and nature. Your plan includes some of its best attractions: head outdoors with Archipelago Anthoy, head off the coast to May Rut Island, take in the waterfront at Ham Ninh Pier, and contemplate the long history of Di Tích Nhà Tù Phú Quốc.

Plan a An Thoi trip in moments using our itinerary builder.

Things to do in An Thoi