The capital of Vietnam, Hanoi has bounded back from the effects of war, and today serves as a bustling commercial and cultural hub bursting at the seams.

Your inner history buff will appreciate Old Quarter and One Pillar Pagoda. You'll discover tucked-away gems like Kayaking & Canoeing and Vietnamese Women's Museum. There's lots more to do: contemplate the long history of Temple of Literature & National University, explore the activities along Lake of the Restored Sword (Hoan Kiem Lake), take in the exciting artwork at TiredCity Hang Bong, and explore the galleries of K S and Friends Art Gallery.

To see where to stay, other places to visit, photos, and more tourist information, refer to the Hanoi online trip itinerary planner.

Vancouver, Canada to Hanoi is an approximately 18.5-hour flight. Due to the time zone difference, you'll lose 15 hours traveling from Vancouver to Hanoi. Finish your sightseeing early on the 10th (Tue) to allow enough time to travel to Cat Ba.
more less

Things to do in Hanoi

The largest of the islands in the south of the bay, Cat Ba offers a base for exploring the many limestone landmasses across the UNESCO-protected bay.

Start off your visit on the 11th (Wed): explore the fascinating underground world of Tien Ong Cave, explore the fascinating underground world of Sung Sot Cave, and then paddle through the water with a kayaking and canoeing tour. On the next day, find your balance on the water with some of the best stand-up paddleboarding in the area and then contemplate the waterfront views at Hạ Long Bay.

For reviews, more things to do, other places to visit, and other tourist information, you can read our Cat Ba online day trip planner.

Traveling by bus from Hanoi to Cat Ba takes 3.5 hours. Finish your sightseeing early on the 12th (Thu) so you can travel to Hoi An.
more less

Things to do in Cat Ba

Indisputably one of Vietnam's most atmospheric destinations, Hoi An contains a World Heritage-listed old town boasting over 2,000 years of culture and history.

Head to Yaly Couture and Precious Heritage by Rehahnfor some retail therapy. You'll enjoy a bit of beach vacationing at Non Nuoc Beach and My Khe Beach. Go for a jaunt from Hoi An to Duy Xuyen District to see Mỹ Sơn about 1h 15 min away. There's still lots to do: cast your line with a fishing tour, don't miss a visit to Hoi An Ancient Town, explore the striking landscape at The Marble Mountains, and see some colorful creatures with a scuba or snorkeling tour.

You can fly from Cat Ba to Hoi An in 5.5 hours. Alternatively, you can take a bus; or do a combination of bus and train. Expect a daytime high around 32°C in March, and nighttime lows around 26°C. Finish your sightseeing early on the 16th (Mon) to allow enough time to travel to Nha Trang.
more less

Things to do in Hoi An

On a vacation in Nha Trang, a famous Vietnam resort town, you can lounge on a beach all day and party into the night.

On the 17th (Tue), see some colorful creatures with a scuba or snorkeling tour and then witness a stunning natural landmark at Hot mineral springs I-Resort Nha Trang. On the 18th (Wed), you'll have a packed day of sightseeing: enjoy the sand and surf at Nha Trang Beach, thencontemplate in the serene atmosphere at Po Nagar Cham Towers, thentake in the exciting artwork at Long Thanh Photo Studio, and finally take in the spiritual surroundings of Long Son Pagoda.

To find photos, maps, more things to do, and other tourist information, go to the Nha Trang trip builder website.

Getting from Hoi An to Nha Trang by flight takes about 4.5 hours. Other options: drive; or take a train. Finish up your sightseeing early on the 18th (Wed) so you can travel to Ho Chi Minh City.
more less

Things to do in Nha Trang

Pearl of the Far East

Formerly known in the West as Saigon and affectionately referred to as the "Pearl of the Far East," Ho Chi Minh City is a study of old and new, woven and piled together in a fast-paced urban hub.

On the 19th (Thu), savor the flavors at Food & Drink, thenhunt for treasures at Ben Thanh Market, and then take an in-depth tour of War Remnants Museum. On the 20th (Fri), you'll have a packed day of sightseeing: browse the exhibits of The Independence Palace, pause for some serene contemplation at Saigon Notre Dame Cathedral, thenadmire the landmark architecture of Central Post Office, thenstop by Cao Minh Saigon, and finally make a trip to Cu Chi Tunnels.

To see reviews, ratings, more things to do, and other tourist information, refer to the Ho Chi Minh City day trip planner.

Fly from Nha Trang to Ho Chi Minh City in 4.5 hours. Alternatively, you can drive; or take a train. In March, daytime highs in Ho Chi Minh City are 40°C, while nighttime lows are 28°C. Finish up your sightseeing early on the 20th (Fri) so you can travel to Duong Dong.
more less

Things to do in Ho Chi Minh City

A holiday in Duong Dong offers cultural diversity, great nature experiences, and a variety of educational and kid-friendly attractions.

To find traveler tips, where to stay, maps, and other tourist information, you can read our Duong Dong journey planning app.

Things to do in Duong Dong 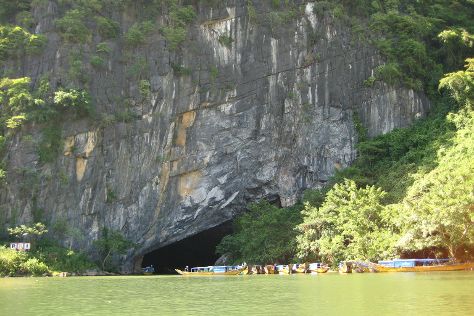 To see ratings, where to stay, more things to do, and tourist information, go to the Phong Nha-Ke Bang National Park online day trip planner.

Things to do in Phong Nha-Ke Bang National Park

Nestled on the banks of the Perfume River, the city of Hue remains most famous as the former home of the Nguyen Dynasty, the influence of which remains evident in local palaces, temples, forts, and museums.

On the 26th (Thu), delve into the distant past at Royal Tombs, contemplate the long history of Tomb of Minh Mang, thensteep yourself in history at Tomb of Tu Duc, thencontemplate the long history of Imperial City, and finally look for gifts at Tinh Hoa Art Shop. On the 27th (Fri), you'll have a packed day of sightseeing: look for all kinds of wild species at Wildlife Areas and then admire the striking features of Thien Mu Pagoda.

Traveling by car from Phong Nha-Ke Bang National Park to Hue takes 3 hours. Alternatively, you can take a bus; or take a train. In March, daily temperatures in Hue can reach 32°C, while at night they dip to 24°C. Finish your sightseeing early on the 27th (Fri) to allow enough time to travel back home.
more less

Things to do in Hue