Get some cultural insight at El Barri Gòtic and Casa Batllo. Basilica of the Sagrada Familia and Barcelona Cathedral will appeal to history buffs. There's lots more to do: walk around Parc Guell, make a trip to Las Ramblas, appreciate the history behind Casa Mila - La Pedrera, and examine the collection at Frederic Mares Museum (Museu Frederic Mares).

To find where to stay, photos, ratings, and tourist information, refer to the Barcelona holiday planner.

Sydney, Australia to Barcelona is an approximately 28-hour flight. You can also do a combination of flight and train. You'll gain 9 hours traveling from Sydney to Barcelona due to the time zone difference. In April, Barcelona is a bit cooler than Sydney - with highs of 22°C and lows of 13°C. Wrap up your sightseeing on the 18th (Sat) early enough to travel to Granada.
more less

Get some historical perspective at Alhambra and Torre de los Enciso. You'll explore the less-touristy side of things at Fundación Cueva de Nerja and Balcon de Europa. Go for a jaunt from Granada to Berja to see Ermita de Ntra. Sra. de Gador about 1h 25 min away. There's lots more to do: wander the streets of Albayzin, pause for some serene contemplation at Basilica de San Juan de Dios, get the lay of the land with Walking tours, and contemplate the long history of Mirador de San Nicolas.

To see maps, ratings, more things to do, and other tourist information, refer to the Granada route planning tool .

Traveling by flight from Barcelona to Granada takes 4.5 hours. Alternatively, you can do a combination of flight and train; or drive. Traveling from Barcelona in April, plan for slightly colder nights in Granada, with lows around 9°C. Wrap up your sightseeing on the 21st (Tue) early enough to travel to Adeje.
more less 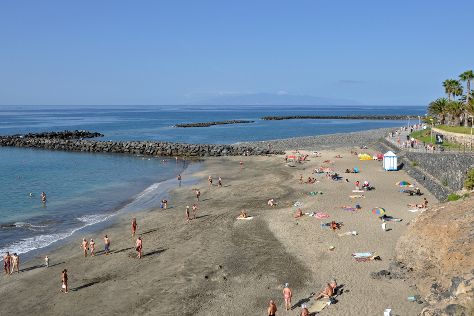 Straddling the foothills of the Teide volcano and Tenerife’s southern shores, Adeje is known for its beautiful island architecture and a backdrop of green, mountainous scenery.

Kick off your visit on the 22nd (Wed): contemplate the geological forces at Teide National Park, enjoy the sand and surf at Playa Fanabe, and then fly like a bird with a parasailing or paragliding tour. Get ready for a full day of sightseeing on the 23rd (Thu): view the masterpieces at La Musa, then kick back and relax at Playa Del Duque, and then kick back and relax at Playa de las Vistas.

To see photos, traveler tips, where to stay, and tourist information, refer to the Adeje travel route builder .

Getting from Granada to Adeje by flight takes about 5 hours. Other options: do a combination of train and flight; or do a combination of flight and bus. The time zone changes from Central European Time to Western European Time, which is usually a -1 hour difference. Traveling from Granada in April, expect somewhat warmer with lows of 19°C in Adeje. Cap off your sightseeing on the 23rd (Thu) early enough to travel to Maspalomas.
more less

Things to do in Adeje 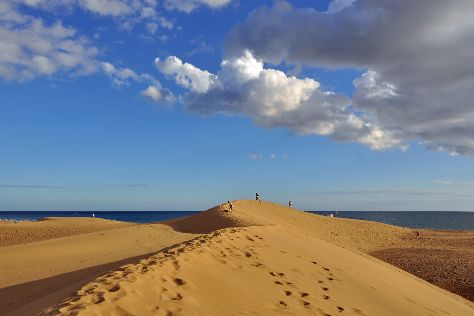 Fondly referred to as “El Sur” by the locals, Maspalomas serves as a hub of entertainment and beach activity on Gran Canary Island.

Visit El Faro de Maspalomas and Vegueta for their historical value. Take a break from the city and head to Playa de Amadores and Las Canteras Beach. Take a break from Maspalomas with a short trip to Museo Etnografico Casas Cuevas in Artenara, about 40 minutes away. There's still lots to do: explore the fascinating landscape at Dunas de Maspalomas, experience the excitement of Motos Tivoli Gran Canaria, get up close and personal with brilliant marine life at Palmitos Park, and take in the dramatic natural features at Los Azulejos de Veneguera.

Ask Inspirock to suggest an itinerary and make planning a trip to Maspalomas fast, fun, and easy.

Getting from Adeje to Maspalomas by combination of car and ferry takes about 3.5 hours. Other options: fly; or do a combination of bus and flight. Expect a daytime high around 26°C in April, and nighttime lows around 19°C. Finish your sightseeing early on the 26th (Sun) so you can travel to Funchal.
more less

Things to do in Maspalomas 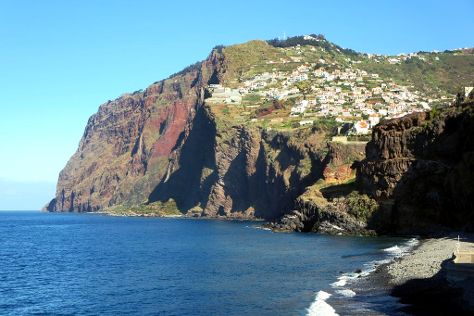 The capital of the island of Madeira for more than 500 years, Funchal represents a laid-back city made popular by its historical sites and climate.

Get outdoors at Cabo Girao and Levada Ribeira de Janela. Appreciate the collections at Frederico de Freitas Museum and Madeira Film Experience. You'll find plenty of places to visit near Funchal: Church of Sao Pedro (in Ponta do Pargo), Ponta de Sao Lourenco (in Machico) and Porto Moniz Natural Swimming Pools (in Porto Moniz). The adventure continues: take in the awesome beauty at Pico do Arieiro, do a tasting at Blandy's Wine Lodge, and get up close to creatures of the deep with a dolphin and whale watching tour.

For more things to do, where to stay, and other tourist information, use the Funchal travel planner .

You can fly from Maspalomas to Funchal in 5 hours. In April, plan for daily highs up to 23°C, and evening lows to 17°C. Finish up your sightseeing early on the 29th (Wed) so you can travel to Lisbon.
more less

Things to do in Funchal

Built on seven hills, Lisbon has experienced a renaissance in recent years, making it the cultural star of Portugal.

Explore hidden gems such as Cabo da Roca and Castelo dos Mouros. Popular historic sites such as Jeronimos Monastery and Park and National Palace of Pena are in your itinerary. Change things up with a short trip to Quinta da Regaleira in Sintra (about 36 minutes away). The adventure continues: step into the grandiose world of Castelo de S. Jorge, pause for some photo ops at Belém Tower, and take a stroll through Chiado.

Start your trip to Lisbon by creating a personalized itinerary on Inspirock.

Getting from Funchal to Lisbon by flight takes about 4 hours. Plan for little chillier nights when traveling from Funchal in April since evenings lows in Lisbon dip to 13°C. Wrap up your sightseeing on the 2nd (Sat) early enough to travel to Seville.
more less

Things to do in Lisbon

Sintra, Cabo da Roca
Find places to stay Apr 29 — May 2:
Hotels on TripAdvisor
Homes on Airbnb
Highlights from your plan 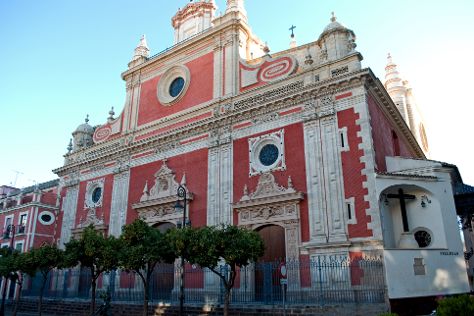 Get some cultural insight at Royal Alcázar of Seville and Museum of Fine Arts, Sevilla. Your inner history buff will appreciate Plaza de España and Plaza de Toros de la Maestranza. Next up on the itinerary: take some stellar pictures from Catedral de Sevilla, make a trip to Torre del Oro, take a stroll through Centro Historico de Sevilla, and take in the architecture and atmosphere at Iglesia Colegial del Salvador.

You can fly from Lisbon to Seville in 4 hours. Alternatively, you can drive; or do a combination of flight and bus. The time zone difference moving from Western European Time to Central European Time is 1 hour. In May, daily temperatures in Seville can reach 30°C, while at night they dip to 17°C. Finish up your sightseeing early on the 5th (Tue) so you can catch the train to Cordoba.
more less

Historic Sites Neighborhoods Museums
Find places to stay May 2 — 5:
Hotels on TripAdvisor
Homes on Airbnb
Highlights from your plan 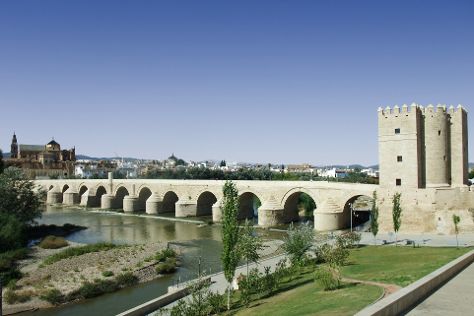 Andalucía’s thousand-year-old city, Córdoba, was once the capital of both the Roman Empire and the Moorish Kingdom, representing an alluring mix of cultural and political history.

Kick off your visit on the 6th (Wed): snap pictures at Roman Bridge, wander the streets of Jewish Quarter (Juderia), then make a trip to Historic Centre of Cordoba, then take in the spiritual surroundings of Mezquita Cathedral de Cordoba, and finally see the interesting displays at Museo del Guadameci Omeya. Exposicion de Ramon Garcia Romero y Jose Carlos V. Garcia. Here are some ideas for day two: get engrossed in the history at Medina Azahara - Conjunto Arqueológico Madinat al-Zahra, then make a trip to Patios de Cordoba, then get engrossed in the history at Palacio de Viana, and finally step into the grandiose world of Castillo de Almodovar del Rio.

For traveler tips, where to stay, reviews, and more tourist information, use the Cordoba trip builder site .

You can take a train from Seville to Cordoba in an hour. Alternatively, you can drive; or take a bus. In May in Cordoba, expect temperatures between 34°C during the day and 14°C at night. Cap off your sightseeing on the 7th (Thu) early enough to catch the train to Madrid.
more less

Things to do in Cordoba

Castillo de Almodovar
Find places to stay May 5 — 7:
Hotels on TripAdvisor
Homes on Airbnb
Highlights from your plan

Get some historical perspective at The Walls of Avila and Catedral Primada. Eschew the tourist crowds and head to Alcazar de Segovia and Monastery of San Juan de los Reyes. You'll find plenty of places to visit near Madrid: Cathedral of Avila (in Avila) and El Transito Synagogue and Sephardic Museum (in Toledo). There's still lots to do: admire the landmark architecture of Royal Palace of Madrid, see the interesting displays at Prado National Museum, explore the world behind art at Museo Cerralbo, and browse the exhibits of Monasterio de las Descalzas Reales.

To plan Madrid vacation without wasting time, ask Inspirock to design an itinerary.

Take a train from Cordoba to Madrid in 2 hours. Alternatively, you can fly; or drive. When traveling from Cordoba in May, plan for slightly colder days in Madrid, with highs around 28°C, while nights are about the same with lows around 13°C. Wrap up your sightseeing on the 11th (Mon) to allow time to travel back home.
more less

Toledo, Avila, Alcazar of Segovia
Find places to stay May 7 — 11:
Hotels on TripAdvisor
Homes on Airbnb
Highlights from your plan

©
The Walls of Avila