Pearl of the Danube

You might consider the city of Budapest, divided by the Danube River into two distinctive cities--Buda and Pest--to be essentially one large World Heritage Site.

Give yourself a bit of retail therapy at Andrassy Avenue and Vaci Street. Get a sense of the local culture at St. Stephen's Basilica (Szent Istvan Bazilika) and Liberty Statue. Change things up with a short trip to Esztergom Basilica / Cathedral in Esztergom (about 1h 10 min away). And it doesn't end there: steep yourself in history at Matthias Church, appreciate the history behind Heroes' Square, take in the exciting artwork at Virag Judit Galllery and Auction House, and make a trip to Fisherman's Bastion.

To plan Budapest vacation without wasting time, ask Inspirock to design an itinerary.

Brisbane, Australia to Budapest is an approximately 28-hour flight. The time zone difference moving from Australian Eastern Standard Time (AEST) to Central European Standard Time (CET) is minus 9 hours. In September in Budapest, expect temperatures between °C during the day and °C at night. Finish up your sightseeing early on the 8th (Tue) so you can go by car to Vienna.
more less

Things to do in Budapest

Discover out-of-the-way places like Historic Center of Vienna and Belvedere Palace. Get a sense of the local culture at Melk Abbey and Peterskirche. Change things up with a short trip to Wachau Valley in Joching (about 1h 15 min away). There's much more to do: explore the historical opulence of Schonbrunn Palace, hunt for treasures at Vienna Naschmarkt, explore the world behind art at Kunsthistorisches Museum Wien, and take in the architecture and atmosphere at St. Stephen's Cathedral.

Getting from Budapest to Vienna by car takes about 2.5 hours. Other options: fly; or take a train. In September, plan for daily highs up to °C, and evening lows to °C. Finish up your sightseeing early on the 11th (Fri) so you can travel to Prague.
more less

Your cultural itinerary includes sights like Lesser Town and Staromestske namesti. Eschew the tourist crowds and head to St. Vitus Cathedral and Lobkowicz Palace. Change things up with a short trip to Beach in Hamr na Jezere (about 1h 30 min away). And it doesn't end there: step into the grandiose world of Prague Castle, take some stellar pictures from Prague Astronomical Clock, see the interesting displays at Czech Repubrick, and take in the architecture and atmosphere at St Cyril and St Methodius Cathedral.

To find ratings, more things to do, where to stay, and tourist information, refer to the Prague day trip website.

Traveling by flight from Vienna to Prague takes 3.5 hours. Alternatively, you can drive; or take a shuttle. September in Prague sees daily highs of °C and lows of °C at night. Finish your sightseeing early on the 14th (Mon) to allow enough time to travel to Venice.
more less

Things to do in Prague 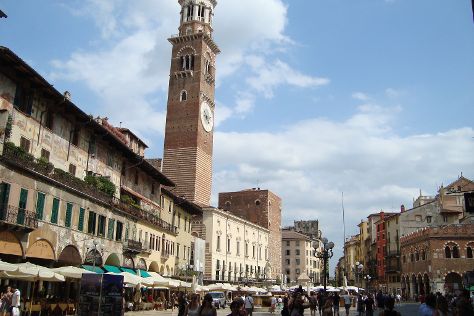 Your cultural itinerary includes sights like Piazza delle Erbe and Doge's Palace. Explore hidden gems such as Cannaregio and Ponte di Rialto. When in Venice, make a side trip to see Basilica di Santa Anastasia in Verona, approximately Verona away. There's much more to do: explore the activities along Canal Grande, admire the striking features of Torre dell'Orologio, snap pictures at Ponte dell'Accademia, and get to know the fascinating history of Piazza San Marco.

To find more things to do, ratings, traveler tips, and tourist information, you can read our Venice trip itinerary planning app.

Getting from Prague to Venice by flight takes about 5 hours. Other options: drive; or take a train. Prepare for somewhat warmer weather when traveling from Prague in September: high temperatures in Venice hover around °C and lows are around °C. Finish your sightseeing early on the 17th (Thu) so you can drive to Florence.
more less

Verona
Find places to stay Sep 14 — 17:
Hotels on TripAdvisor
Homes on Airbnb
Highlights from your plan

Satisfy your inner culture vulture at Guardastelle Vineyard and Piazza del Duomo. Eschew the tourist crowds and head to Basilica of Santa Croce and Campanile di Giotto. And it doesn't end there: take in the views from Ponte Vecchio, take an in-depth tour of Corridoio Vasariano, contemplate the long history of Cathedral of Santa Maria del Fiore, and don't miss a visit to Piazzale Michelangelo.

For more things to do, reviews, where to stay, and other tourist information, you can read our Florence trip maker app.

You can drive from Venice to Florence in 3 hours. Other options are to take a train; or fly. In September, daily temperatures in Florence can reach °C, while at night they dip to °C. Wrap up your sightseeing on the 20th (Sun) early enough to drive to Positano.
more less 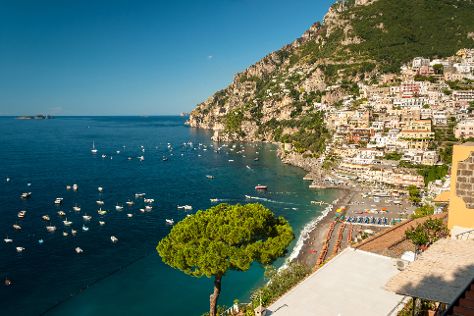 Often referred to as the gem of the Amalfi Coast, Positano remains one of southern Italy's most sought-after vacation locales, thanks to its hillside location and picturesque, pastel buildings.

Kick off your visit on the 21st (Mon): take some stellar pictures from Il Sentiero Degli Dei, thenmake a trip to Parrocchia Di San Gennaro, and then kick back and relax at Spiaggia Grande. Get ready for a full day of sightseeing on the next day: stop by Artigianato Rallo, thentour the pleasant surroundings at Fornillo, thenstroll through Bagni d'Arienzo Beach Club, Positano, and finally see the interesting displays at Villa Fondi.

For photos, where to stay, more things to do, and more tourist information, refer to the Positano trip planner.

Traveling by car from Florence to Positano takes 5.5 hours. Alternatively, you can do a combination of train, subway, and bus; or do a combination of flight, train, subway, and bus. Expect somewhat warmer evenings in Positano when traveling from Florence in September, with lows around °C. Cap off your sightseeing on the 22nd (Tue) early enough to go by car to Ravello.
more less

Things to do in Positano 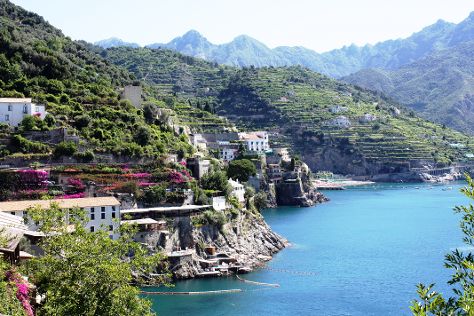 Best known for its celebrated terraced gardens, Ravello is a hidden gem of Italy's Amalfi Coast.

Get a sense of the local culture at Villa Cimbrone Gardens and Ceramiche D'Arte Pascal. You'll enjoy a bit of beach vacationing at Spiaggia di castiglione and Lido di Ravello. The adventure continues: make a trip to Villa Rufolo, contemplate in the serene atmosphere at Duomo di Ravello, pause for some serene contemplation at Cloister del Paradiso, and trek along Ravello-Minori Walk.

To see where to stay, ratings, more things to do, and other tourist information, use the Ravello trip planner.

Drive from Positano to Ravello in an hour. Alternatively, you can ride a ferry; or take a bus. In September in Ravello, expect temperatures between °C during the day and °C at night. Finish up your sightseeing early on the 25th (Fri) so you can go by car to Rome.
more less

Things to do in Ravello

Amalfi
Find places to stay Sep 22 — 25:
Hotels on TripAdvisor
Homes on Airbnb
Highlights from your plan

Your cultural itinerary includes sights like Colosseum and Vatican Museums. Step off the beaten path and head to Trastevere and Centro Storico Associazione Centro Storico. Venture out of the city with trips to Duomo di Orvieto (in Orvieto) and Civita di Bagnoregio (in Bagnoregio). And it doesn't end there: explore the ancient world of Pantheon, appreciate the extensive heritage of Piazza Navona, don't miss a visit to St. Peter's Basilica, and take a stroll through Via Condotti.

You can drive from Ravello to Rome in 3.5 hours. Other options are to do a combination of taxi and train; or take a bus. Traveling from Ravello in September, Rome is slightly colder at night with lows of °C. Finish your sightseeing early on the 29th (Tue) to allow enough time to travel to Barcelona.
more less

Start off your visit on the 30th (Wed): stroll around Parc Guell, don't miss a visit to Basilica of the Sagrada Familia, thenexamine the collection at Carrer del Mirador del Palau Nacional, and finally get a taste of the local shopping with La Boqueria. On the next day, don't miss a visit to Casa Batllo, wander the streets of El Barri Gòtic, thenvisit Ciutat Vella, thentake a stroll through El Born, and finally stop by Casa Gispert.

To see traveler tips, other places to visit, where to stay, and other tourist information, read Barcelona visit planning tool.

Traveling by flight from Rome to Barcelona takes 5.5 hours. Alternatively, you can drive; or take a train. In September, plan for daily highs up to °C, and evening lows to °C. Finish your sightseeing early on the 1st (Thu) so you can travel to Paris.
more less

Do your shopping at Le Marais and Saint Germain des Pres Quarter. Step off the beaten path and head to Montmartre and Basilique du Sacre-Coeur de Montmartre. There's still lots to do: explore and take pictures at Eiffel Tower, explore the world behind art at Musee d'Orsay, wander the streets of 1st Arrondissement, and kick back and relax at Paris Plage.

For reviews, more things to do, photos, and more tourist information, you can read our Paris attractions planner.

Traveling by flight from Barcelona to Paris takes 5.5 hours. Alternatively, you can take a train; or drive. In October, Paris is little chillier than Barcelona - with highs of °C and lows of °C. Cap off your sightseeing on the 4th (Sun) early enough to catch the train to Amsterdam.
more less

You'll discover tucked-away gems like Museum Ons' Lieve Heer op Solder and Begijnhof. Satisfy your inner culture vulture at Anne Frank House and The Mauritshuis Royal Picture Gallery. The adventure continues: wander the streets of The Jordaan, engage your brain at Body Worlds, explore the world behind art at Rijksmuseum, and shop like a local with Leidseplein.

To see more things to do, other places to visit, ratings, and more tourist information, refer to the Amsterdam tour itinerary maker website.

You can take a train from Paris to Amsterdam in 4.5 hours. Alternatively, you can fly; or drive. In October, daily temperatures in Amsterdam can reach °C, while at night they dip to °C. You'll have a few hours on the 8th (Thu) to wrap things up before traveling home.
more less