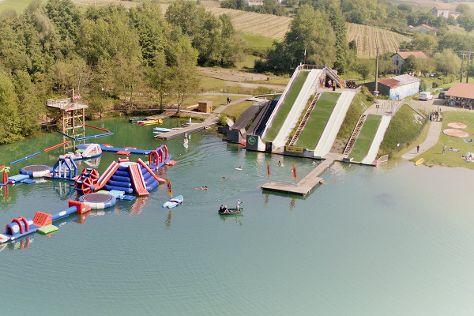 ©
Base de Pop has been added to your itinerary. Kick off your visit on the 15th (Fri): cool off at Base de Pop, don't miss a visit to Abbaye d'Arthous, take in the architecture and atmosphere at Eglise abbatiale St Jean de Sorde, make a trip to Abbaye St Jean de Sorde, then explore the historical opulence of Chateau de Gramont (Bidache), and finally contemplate in the serene atmosphere at Notre Dame de l'Assomption.

For ratings, other places to visit, photos, and more tourist information, refer to the Guiche trip itinerary website.

Sare to Guiche is an approximately 1-hour car ride. In June, daily temperatures in Guiche can reach 29°C, while at night they dip to 17°C. Finish your sightseeing early on the 15th (Fri) to allow enough time to travel to Sare.
more less

Things to do in Guiche

©
Sare is a village in the traditional Basque province of Labourd, now a commune in the Pyrénées-Atlantiques department in south-western France on the border with Spain.GeographyThe commune is backed by the Pyrenean mountain range, which forms a basin around the village open to the east and the north. Your day by day itinerary now includes Dioxka Golf Academie, Les Gorges de Kakuetta and Le Train de la Rhune. Explore the numerous day-trip ideas around Sare: Digue de Socoa (in Ciboure), Hendaye (Plage d'Hendaye & Chateau Observatoire Abbadia) and Bayonne (Cathedrale Sainte-Marie de Bayonne & Room Escape Games). Next up on the itinerary: Head underground at Les Grottes de Sare, contemplate in the serene atmosphere at Église Saint-Jean-Baptiste, take a leisurely stroll along Promenade Jacques Thibaud, and trek along Sentier du Littoral.

To see maps, other places to visit, and tourist information, read our Sare trip planning site.

You can drive from Guiche to Sare in an hour. Traveling from Guiche in June, expect nights in Sare to be about the same, around 18°C, while days are little chillier, around 26°C. Finish up your sightseeing early on the 18th (Mon) so you can travel back home.
more less

Things to do in Sare