For reviews, more things to do, other places to visit, and more tourist information, go to the Nice trip planner.

Athens, Greece to Nice is an approximately 6.5-hour flight. You can also drive; or do a combination of bus, ferry, and train. Due to the time zone difference, you'll gain 1 hour traveling from Athens to Nice. When traveling from Athens in June, plan for a bit cooler days in Nice, with highs around 28°C, while nights are about the same with lows around 22°C. Finish your sightseeing early on the 28th (Mon) so you can drive to Saint-Raphael.
more less 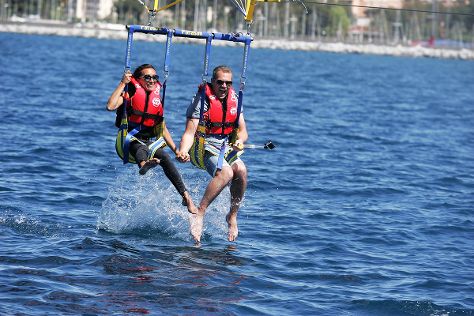 Saint-Raphael vacations have so much more to offer than an indulgent splurge on a beach.

For maps, photos, where to stay, and other tourist information, refer to the Saint-Raphael travel route planner.

You can drive from Nice to Saint-Raphael in 1.5 hours. Other options are to take a train; or do a combination of bus and train. Traveling from Nice in June, expect nights in Saint-Raphael to be slightly colder, around 17°C, while days are a bit warmer, around 34°C. Wrap up your sightseeing on the 4th (Sun) to allow time to drive to Saint-Tropez.
more less

Things to do in Saint-Raphael

To find where to stay, ratings, other places to visit, and more tourist information, go to the Saint-Tropez journey app.

You can drive from Saint-Raphael to Saint-Tropez in 1.5 hours. Other options are to take a train; or ride a ferry. Expect somewhat warmer weather when traveling from Saint-Raphael in July: highs in Saint-Tropez hover around 38°C, while lows dip to 20°C. Wrap up your sightseeing on the 11th (Sun) early enough to drive to Castellane.
more less

©
Castellane is a commune in the Alpes-de-Haute-Provence department in southeastern France. Explore the numerous day-trip ideas around Castellane: Chapelle Saint Pierre (in Aiguines), Aups (La Tuilliere & Musee de Faykod) and Col du Bel-Homme (in Bargemon). There's much more to do: explore the activities along Les Gorges du Verdon, make a trip to Porte Royale, take in the architecture and atmosphere at Cathedrale Notre Dame de l'Assomption d`Entrevaux, and get the adrenaline pumping with an extreme tour.

For more things to do, photos, where to stay, and more tourist information, refer to the Castellane trip planner.

Traveling by car from Saint-Tropez to Castellane takes 2 hours. Alternatively, you can do a combination of train and bus; or do a combination of ferry, train, and bus. In July in Castellane, expect temperatures between 37°C during the day and 20°C at night. Cap off your sightseeing on the 16th (Fri) early enough to go by car to Avignon.
more less

Things to do in Castellane

An ancient town center surrounded by medieval ramparts, Avignon is a major city of Provence and a Mediterranean city in the Vaucluse department on the left bank of the Rhône River.

To find more things to do, where to stay, and tourist information, read Avignon online road trip planner.

Drive from Castellane to Avignon in 3 hours. Alternatively, you can do a combination of taxi and train; or take a bus. In July, plan for daily highs up to 36°C, and evening lows to 20°C. Finish your sightseeing early on the 22nd (Thu) so you can drive to Marseille.
more less

Things to do in Avignon

Traveling by car from Avignon to Marseille takes 1.5 hours. Alternatively, you can take a train; or take a bus. Expect a daytime high around 36°C in July, and nighttime lows around 23°C. Finish up your sightseeing early on the 29th (Thu) so you can travel back home.
more less