Hinwil is a municipality in the district of Hinwil in the canton of Zürich in Switzerland.HistoryThe village Hinwil from which the later municipality took its name is first mentioned in 745 as Hunichinwilari, in a donation made by Beata and Landolt to the Abbey of Saint Gall. For more things to do, reviews, and tourist information, use the Hinwil trip site.

Mumbai, India to Hinwil is an approximately 12.5- hour combination of flight and car. You'll gain 4.5 hours traveling from Mumbai to Hinwil due to the time zone difference. In March, Hinwil is much colder than Mumbai - with highs of 13°C and lows of 1°C. You will leave for Augsburg on the 18th (Mon).
more less

Things to do in Hinwil 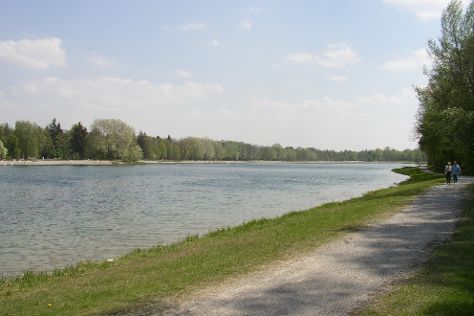 Easily and quickly accessible from anywhere in the country, Augsburg is packed with historical attractions and intersected by quaint cobbled streets.

Start off your visit on the 19th (Tue): admire the landmark architecture of Augsburg Town Hall, head outdoors with Kuhsee, then see the interesting displays at Mazda Classic - Automobil Museum Frey, and finally steep yourself in history at Furstbischofliche Residenz.

Drive from Hinwil to Augsburg in 3.5 hours. Expect a daytime high around 11°C in March, and nighttime lows around 0°C. Finish your sightseeing early on the 19th (Tue) so you can travel to Nuertingen.
more less

Things to do in Augsburg

©
On the 20th (Wed), pause for some serene contemplation at Stadtkirche Sankt Laurentius.

For photos, other places to visit, ratings, and other tourist information, read our Nuertingen attractions planner.

You can drive from Augsburg to Nuertingen in 2 hours. March in Nuertingen sees daily highs of 11°C and lows of 0°C at night. Wrap up your sightseeing by early afternoon on the 20th (Wed) to allow time for travel to Berlin.
more less

Things to do in Nuertingen

Athens of the Spree

The country's capital and largest city, Berlin is a diverse urban center boasting a lively nightlife and countless things to do.

To see other places to visit, more things to do, and tourist information, use the Berlin sightseeing planner.

Use the Route module to find suitable travel options from Nuertingen to Berlin. Finish your sightseeing early on the 21st (Thu) to allow enough time to travel back home.
more less

Things to do in Berlin

Museums
Find places to stay Mar 20 — 21:
Hotels on TripAdvisor
Homes on Airbnb
Highlights from your plan

©
The Holocaust Memorial - Memorial to the Murdered Jews of Europe