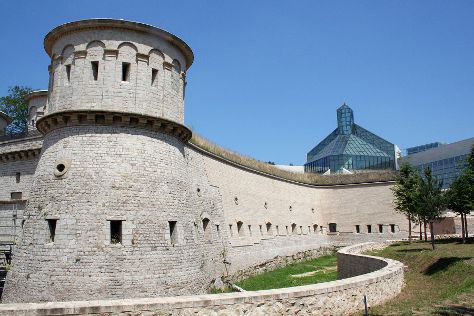 Gibraltar of the North

While Luxembourg City boasts the shiny headquarters of several European institutions and EU offices, it is also home to a beautiful old town that's designated as a World Heritage Site.

Museum-lovers will get to explore National Museum of Natural History and Mudam Luxembourg Modern Art Museum. You'll explore the less-touristy side of things at Luxembourg American Cemetery Memorial and Museum Drai Eechelen. When in Luxembourg City, make a side trip to see Luxembourg Science Center in Differdange, approximately Differdange away. The adventure continues: appreciate the extensive heritage of Le Chemin de la Corniche, contemplate in the serene atmosphere at Saint Michel's Church, take an in-depth tour of Fort Thungen, and relax and rejuvenate at Les Thermes.

To see where to stay, photos, traveler tips, and more tourist information, use the Luxembourg City day trip tool.

Denver, USA to Luxembourg City is an approximately 15-hour flight. The time zone changes from Mountain Standard Time to Central European Standard Time, which is usually an 8 hour difference. Traveling from Denver in February, expect nights in Luxembourg City to be somewhat warmer, around 30°F, while days are a bit cooler, around 40°F. Wrap up your sightseeing on the 3rd (Wed) to allow time to drive to Brussels.
more less

Things to do in Luxembourg City

Grand Place and Parc du Cinquantenaire will appeal to history buffs. Museum-lovers will get to explore René Magritte Museum and Atomium. Change things up with these side-trips from Brussels: Antwerp (Museum Plantin-Moretus, Museum De Reede, &more) and Spa Cinq Mondes (in La Hulpe). And it doesn't end there: contemplate the long history of St. Michael and St. Gudula Cathedral (Cathedrale St-Michel et Ste-Gudule), examine the collection at Horta Museum (Musee Horta), don't miss a visit to Belgian Comic Strip Center, and get a new perspective on nature at Museum of Natural Sciences.

For reviews, where to stay, and more tourist information, read our Brussels trip itinerary planner.

You can drive from Luxembourg City to Brussels in 2.5 hours. Other options are to take a bus; or take a train. In March in Brussels, expect temperatures between 48°F during the day and 35°F at night. Finish your sightseeing early on the 10th (Wed) so you can drive to Bruges.
more less 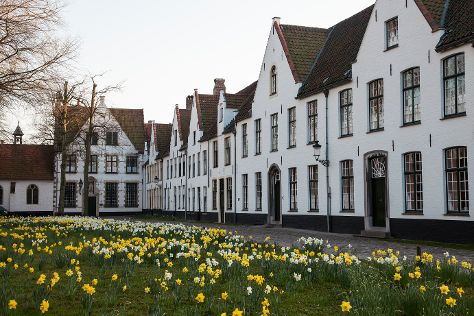 The medieval town of Bruges centers around a canal, and the architecture of its historical district has made it a World Heritage Site.

Let the collections at Gravensteen and Groeningemuseum capture your imagination. Get some historical perspective at The Princely Beguinage Ten Wijngaarde and Historic Centre of Brugge. You'll find plenty of places to visit near Bruges: Ghent (Museum Voor Schone Kunsten & STAM Ghent City Museum) and Beach De Haan (in De Haan). Next up on the itinerary: take in panoramic vistas at Belfry of Bruges, indulge your thirst for a good beer at Huisbrouwerij De Halve Maan, take in the spiritual surroundings of Brugge Sint Jacobskerk, and contemplate the long history of Sashuis.

For other places to visit, reviews, maps, and other tourist information, you can read our Bruges trip builder site.

Traveling by car from Brussels to Bruges takes 1.5 hours. Alternatively, you can take a train; or take a bus. March in Bruges sees daily highs of 50°F and lows of 36°F at night. Finish your sightseeing early on the 14th (Sun) to allow enough time to drive to Amsterdam.
more less

Things to do in Bruges

Head to The Mauritshuis Royal Picture Gallery and Architecture Centre of Amsterdamfor some retail therapy. You'll explore the less-touristy side of things at Micropia and Moco Museum. Get out of town with these interesting Amsterdam side-trips: The Hague (Louwman Museum The Hague, Escher in Het Paleis (Escher in the Palace), &more) and Utrecht (Canals area, Dom Tower, &more). Next up on the itinerary: admire the masterpieces at Van Gogh Museum, get engrossed in the history at Anne Frank House, see the interesting displays at Zaanse Schans, and stop by The Jordaan.

Traveling by car from Bruges to Amsterdam takes 3 hours. Alternatively, you can take a train; or fly. In March, plan for daily highs up to 49°F, and evening lows to 35°F. Finish up your sightseeing early on the 21st (Sun) so you can travel to London.
more less

Vibrant and noisy, London is one of the world’s leading cities, an international capital of culture, education, fashion, music, finance, trade, and politics.

Deepen your sense of the past at sights like HMS Belfast and Cutty Sark. Discover out-of-the-way places like British Library and Museum of London. And it doesn't end there: admire the masterpieces at National Gallery, catch a live event at Emirates Stadium Tour and Museum, sample some tasty brews at a beer tour and tasting, and take an in-depth tour of The British Museum.

Getting from Amsterdam to London by flight takes about 4.5 hours. Other options: take a train; or do a combination of car and train. Due to the time zone difference, you'll gain 1 hour traveling from Amsterdam to London. In March, plan for daily highs up to 50°F, and evening lows to 37°F. Cap off your sightseeing on the 29th (Mon) early enough to catch the train to Liverpool.
more less

Things to do in London

Famous for being the birthplace of the Beatles, Liverpool is a vibrant city with an outstanding cultural heritage.

Visit World Museum and Sudley House for their historical value. Museum-lovers will appreciate Museum of Liverpool and The Beatles Story. Next up on the itinerary: see the interesting displays at Merseyside Maritime Museum, get thoroughly spooked out with Shiverpool, admire the striking features of St. George's Hall, and appreciate the history behind Beatles Statue.

For traveler tips, reviews, more things to do, and tourist information, go to the Liverpool online route planner.

Getting from London to Liverpool by train takes about 3 hours. Other options: drive; or fly. In March, plan for daily highs up to 49°F, and evening lows to 37°F. Cap off your sightseeing on the 5th (Mon) early enough to catch the train to Edinburgh.
more less

Things to do in Liverpool

Athens of the North

Do some cultural sightseeing at Rosslyn Chapel and Surgeons' Hall Museums. Explore hidden gems such as The McManus: Dundee's Art Gallery & Museum and Edinburgh Gin Distillery. Explore the numerous day-trip ideas around Edinburgh: Blackness Castle (in Linlithgow), The Birks of Aberfeldy (in Aberfeldy) and Perth Railway Station (in Perth). There's much more to do: explore the historical opulence of Edinburgh Castle, hit the best photo ops around with an inspiring photography tour, see the interesting displays at Royal Yacht Britannia, and explore the world behind art at Scottish National Gallery of Modern Art, Modern Two.

To see where to stay, reviews, photos, and other tourist information, you can read our Edinburgh tour itinerary planner.

Traveling by train from Liverpool to Edinburgh takes 4 hours. Alternatively, you can drive; or fly. Traveling from Liverpool in April, you can expect nighttime temperatures to be a bit cooler in Edinburgh, with lows of 37°F. Finish your sightseeing early on the 12th (Mon) so you can travel to Killarney.
more less

Things to do in Edinburgh

Your inner history buff will appreciate Muckross House and Ross Castle. Eschew the tourist crowds and head to Killarney National Park and Muckross Abbey. Change things up with a short trip to Banna Strand in Tralee (about 52 minutes away). Next up on the itinerary: sample the fine beverages at Irish Whiskey Experience, get to know the fascinating history of Old Boathouse Trail, relax and rejuvenate at some of the best spas, and snap pictures at Old Weir Bridge.

Things to do in Killarney

A history spanning over a thousand years, vibrant nightlife, and a mix of Georgian and modern architecture make Dublin a popular European tourist destination.

Museum-lovers will get to explore Guinness Storehouse and Kilmainham Gaol Museum. Popular historic sites such as 14 Henrietta Street and O'Connell Street are in your itinerary. Step out of Dublin to go to Kildare and see Kildare Village, which is approximately 1h 10 min away. The adventure continues: examine the collection at Croke Park Stadium Tour & GAA Museum, browse the exhibits of Dublinia, admire the masterpieces at Chester Beatty, and brush up on your knowledge of spirits at Teeling Whiskey Distillery.

Drive from Killarney to Dublin in 3.5 hours. Alternatively, you can take a train; or fly. Expect little chillier evenings in Dublin when traveling from Killarney in April, with lows around 37°F. You will have some time to spend on the 25th (Sun) before leaving for home.
more less

Things to do in Dublin