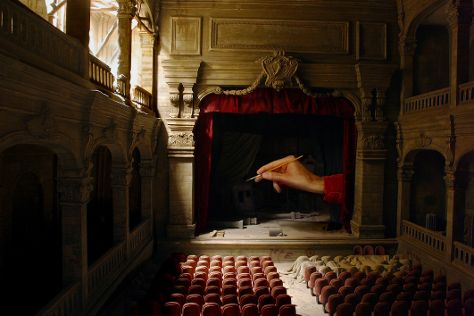 Lyon is a historical city with a vibrant cultural scene as the birthplace of cinema, the silk capital of the globe, and the second biggest Renaissance city following Venice.

Use Inspirock's suggestions to plan your Lyon trip and find the best activities and attractions for your vacation.

Things to do in Lyon

Venture out of the city with trips to Rocher des Doms (in Avignon), Aix-en-Provence (Vieil Aix, Cours Mirabeau, &more) and Le Suquet (in Cannes). There's much more to do: get to know the fascinating history of Vallon des Auffes, wander the streets of The Panier, take in the spiritual surroundings of Cathédrale La Major, and explore the striking landscape at Calanques.

To find other places to visit, photos, ratings, and tourist information, you can read our Marseille route website.

You can take a train from Lyon to Marseille in 2.5 hours. Alternatively, you can drive; or fly. While traveling from Lyon, expect a bit warmer days and about the same nights in Marseille, ranging from highs of 14°C to lows of 4°C. Finish your sightseeing early on the 25th (Sat) so you can drive to Montpellier.
more less

"Montpellier is a modern, compact, and fast-growing city about 10 km (6 mi) inland from the Mediterranean coast with an active, youthful vibe.

Getting from Marseille to Montpellier by car takes about 2 hours. Other options: take a train; or take a bus. In January in Montpellier, expect temperatures between 14°C during the day and 4°C at night. Cap off your sightseeing on the 30th (Thu) early enough to go by car to Carcassonne.
more less

Things to do in Montpellier

Best known as a fortified town, Carcassonne is a walled city that provided the inspiration for the castle in Disney's "Sleeping Beauty" and the location for many scenes in Kevin Costner's movie "Robin Hood." For a daily dose of excitement, medieval jousting tournaments are held twice per day between the two walls--while this may sound like a typical touristy show, it's actually an entertaining display of combative competition and horsemanship.

Step off the beaten path and head to Cathar Castles and Chateau Comtal. Explore Carcassonne's surroundings by going to Cathedrale St-Jean (in Perpignan), Narbonne (Les Halles de Narbonne & Cathedrale St-Just) and Orgues d'Ille Sur Tet (in Ille-sur-Tet). And it doesn't end there: pause for some serene contemplation at Eglise Notre Dame des Anges, step into the grandiose world of Chateau Royale de Collioure, and witness the site of a historic battle at Château de Salses.

To find ratings, where to stay, maps, and other tourist information, use the Carcassonne trip maker tool.

Getting from Montpellier to Carcassonne by car takes about 1.5 hours. Other options: take a train; or take a bus. In January, daily temperatures in Carcassonne can reach 11°C, while at night they dip to 3°C. Cap off your sightseeing on the 2nd (Sun) early enough to go by car to Toulouse.
more less

Things to do in Carcassonne

On the Garonne River, Toulouse is on the site of an ancient Roman settlement, and even today, many of the smaller streets follow their Roman counterparts, while many of the red brick buildings are built in a pseudo-Roman style.

Eschew the tourist crowds and head to Pont Vieux and Château de Pau. Explore the numerous day-trip ideas around Toulouse: Pont Valentre (in Cahors), Cloitre Saint-Jean (in Bagneres-de-Bigorre) and Lourdes (Chateau Fort of Lourdes, Grotte de Massabielle, &more). There's still lots to do: take in nature's colorful creations at Les Jardins de la Berbie, take in the architecture and atmosphere at Cathedrale Sainte-Cecile, explore the world behind art at Musee Toulouse-Lautrec, and contemplate in the serene atmosphere at Basilique Saint-Sernin.

To see more things to do, where to stay, ratings, and more tourist information, use the Toulouse trip itinerary planning website.

Drive from Carcassonne to Toulouse in 1.5 hours. Alternatively, you can take a train; or take a bus. February in Toulouse sees daily highs of 13°C and lows of 3°C at night. Finish your sightseeing early on the 7th (Fri) so you can drive to Bordeaux.
more less

Things to do in Toulouse

The Port of the Moon

With a long history of producing regional wines since the Romans brought grapevines here during the first century, so many people consider Bordeaux to be the wine capital of the world.

To find ratings, where to stay, reviews, and tourist information, use the Bordeaux trip planner.

Getting from Toulouse to Bordeaux by car takes about 2.5 hours. Other options: take a train; or take a bus. In February, plan for daily highs up to 13°C, and evening lows to 3°C. Finish your sightseeing early on the 12th (Wed) to allow enough time to drive to La Rochelle.
more less

Things to do in Bordeaux

Driving on the narrow streets can be difficult in La Rochelle so walking or biking will give you the best view of the pale stone buildings that give the Vieux Port, or old port, a distinctly Mediterranean quality.

Start your trip to La Rochelle by creating a personalized itinerary on Inspirock.

Traveling by car from Bordeaux to La Rochelle takes 2 hours. Alternatively, you can take a bus; or take a train. In February, daily temperatures in La Rochelle can reach 11°C, while at night they dip to 4°C. Wrap up your sightseeing on the 17th (Mon) early enough to drive to Nantes.
more less

Things to do in La Rochelle

Venice of the West

Regarded as an art and history city, Nantes is called the Venice of the West.

To see where to stay, maps, other places to visit, and more tourist information, go to the Nantes day trip planning app.

You can drive from La Rochelle to Nantes in 2 hours. Other options are to take a bus; or take a train. Expect a daytime high around 11°C in February, and nighttime lows around 3°C. Finish your sightseeing early on the 20th (Thu) to allow enough time to drive to Bayeux.
more less

Things to do in Nantes 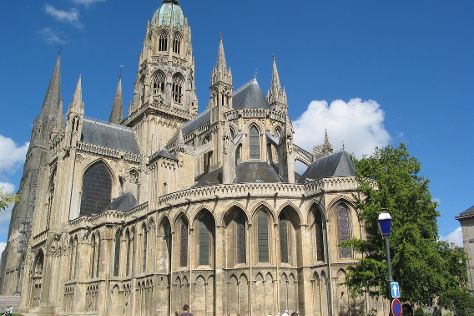 Step off the beaten path and head to Cathedrale de Saint-Julien de Mans and Pegasus Memorial. Change things up with these side-trips from Bayeux: Musee du Debarquement Utah Beach (in Sainte-Marie-du-Mont), Pointe du Grouin (in Cancale) and Airborne Museum (in Sainte-Mere-Eglise). And it doesn't end there: explore the different monuments and memorials at Cimetiere Militaire Allemand de La Cambe, contemplate the long history of Remains Mulberry Harbour, brush up on your military savvy at Memorial de Caen, and stop by La Maison du Biscuit.

Drive from Nantes to Bayeux in 3.5 hours. Alternatively, you can take a train; or do a combination of flight and train. In February, daytime highs in Bayeux are 9°C, while nighttime lows are 2°C. Finish your sightseeing early on the 25th (Tue) to allow enough time to drive to Paris.
more less 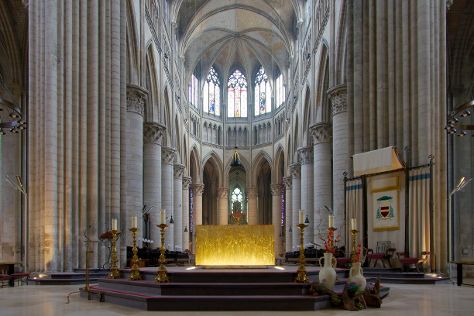 Change things up with these side-trips from Paris: Chateau de Cheverny (in Cheverny), Rouen (Cathedrale Notre-Dame de Rouen & Rue du Gros-Horloge) and Honfleur (Saint Catherine's Catholic Church & Vieux Bassin). Next up on the itinerary: don't miss a visit to Ile Saint-Louis, wander the streets of Saint Germain des Pres Quarter, explore the historical opulence of Chateau Royal de Blois, and get engrossed in the history at Centre of the Resistance, deportation and memory.

To see traveler tips, ratings, other places to visit, and more tourist information, use the Paris driving holiday planner.

Getting from Bayeux to Paris by car takes about 3 hours. Other options: take a train; or do a combination of train and bus. February in Paris sees daily highs of 9°C and lows of 1°C at night. Wrap up your sightseeing on the 1st (Sun) to allow time to take a train to Lille.
more less

©
Centre of the Resistance, deportation and memory 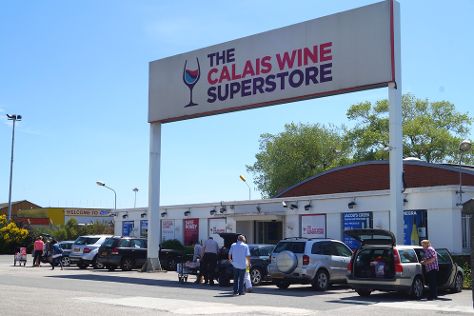 On the Deûle River near the Belgium border, Lille has a very active cultural life as France's fifth-largest metropolitan area and the fourth-largest urban area with a large college student population.

Eschew the tourist crowds and head to l'Hotel de Ville de Calais and Cathedrale Notre-Dame de Laon. Get out of town with these interesting Lille side-trips: Musée du Louvre-Lens (in Lens), Cathedrale Notre-Dame d'Amiens (in Amiens) and Calais Wine Superstore (in Calais). On the 4th (Wed), enjoy a perfect day by the water at Le Touquet Beach. And it doesn't end there: wander the streets of Vieux-Lille, examine the collection at Musee La Piscine, and make a trip to Grande Place.

Traveling by train from Paris to Lille takes 2 hours. Alternatively, you can drive; or take a bus. March in Lille sees daily highs of 13°C and lows of 3°C at night. Wrap up your sightseeing on the 5th (Thu) to allow time to take a train to Strasbourg.
more less

Things to do in Lille

Strasbourg is famous for its beautiful historical center, the Grande Île, which was the first city center classified entirely as a World Heritage Site by UNESCO.

For reviews, traveler tips, ratings, and other tourist information, you can read our Strasbourg itinerary planner.

You can take a train from Lille to Strasbourg in 4 hours. Other options are to fly; or drive. In March in Strasbourg, expect temperatures between 14°C during the day and 1°C at night. Wrap up your sightseeing on the 13th (Fri) early enough to travel back home.
more less

Things to do in Strasbourg