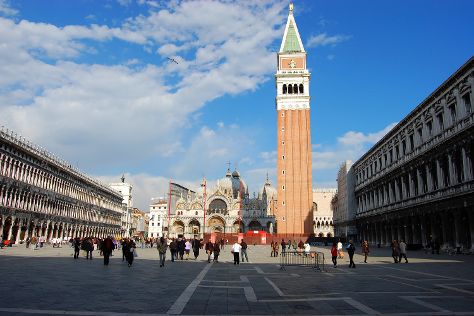 For photos, maps, and more tourist information, you can read our Venice route planner.

Huntsville, USA to Venice is an approximately 15.5-hour flight. Traveling from Huntsville to Venice, you'll lose 7 hours due to the time zone difference. January in Venice sees daily highs of °F and lows of °F at night. Cap off your sightseeing on the 11th (Sat) early enough to go by car to Verona.
more less 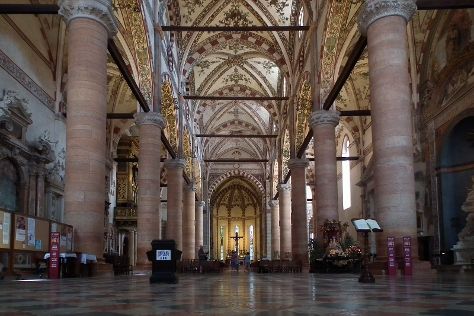 City of Romeo and Juliet

Drive from Venice to Verona in 1.5 hours. Alternatively, you can take a bus; or take a shuttle. Cap off your sightseeing on the 14th (Tue) early enough to go by car to Milan.
more less

Things to do in Verona

In many ways the most modern of Italian cities, Milan is a busy, elegant metropolis with an impressive list of grand palaces, fine churches, and important museums.

Do some cultural sightseeing at Duomo di Milano and Tempio Civico della Beata Vergine Incoronata. Head to Galleria Vittorio Emanuele II and Bolaffi Collezionismo dal 1890for plenty of shopping. Go for a jaunt from Milan to Bergamo to see Mura Venete about 1h 10 min away. There's lots more to do: take in the architecture and atmosphere at Chiesa di Santa Maria presso San Satiro, admire the masterpieces at Museo Poldi Pezzoli, ponder the world of politics at Palazzo Marino, and see the interesting displays at Museo del Novecento.

For more things to do, where to stay, other places to visit, and more tourist information, go to the Milan trip planner.

You can drive from Verona to Milan in 2 hours. Another option is to take a train. In January in Milan, expect temperatures between °F during the day and °F at night. Finish your sightseeing early on the 19th (Sun) to allow enough time to take a train to Turin.
more less

Things to do in Milan

A city of technology and industry, Turin is in northwestern Italy, a one-hour drive from the French border and slightly more than that from the Mediterranean Sea.

Kick off your visit on the 19th (Sun): pause for some serene contemplation at Cappella dei Banchieri e dei Mercanti, pause for some serene contemplation at Basilica di Maria Ausiliatrice, step into the grandiose world of Castello di Verres, thenexplore the historical opulence of Castello di Issogne, and finally steep yourself in history at Pont-Saint-Martin. Here are some ideas for day two: get engrossed in the history at Museo Egizio, take in the architecture and atmosphere at Chiesa di San Filippo Neri, thentake a stroll through Quadrilatero Romano, and finally see the interesting displays at Linea 7 Storica.

You can take a train from Milan to Turin in 1.5 hours. Other options are to drive; or take a bus. In January in Turin, expect temperatures between °F during the day and °F at night. You'll have a few hours on the 21st (Tue) to wrap things up before traveling to Genoa.
more less

Things to do in Turin

Once the most important harbor in the Mediterranean Sea, Genoa has a long history as a rich and powerful trade center in northern Italy.

For photos, where to stay, reviews, and more tourist information, you can read our Genoa route planner.

Traveling by car from Turin to Genoa takes 2 hours. Alternatively, you can take a train; or take a bus. Traveling from Turin in January, expect Genoa to be a bit warmer, temps between °F and °F. Wrap up your sightseeing on the 23rd (Thu) to allow time to take a train to Bologna.
more less

Things to do in Genoa 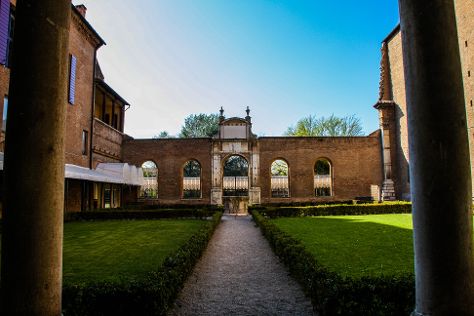 A city famous for its cuisine, Bologna is the seat of the oldest university in the world, founded in 1088.

Escape the urban bustle at Torre Prendiparte and Bagno Egisto 38. Get some historical perspective at Chiesa di Santa Maria della Vita and Basilica - Santuario di Santo Stefano. Venture out of the city with trips to Palazzo dei Diamanti (in Ferrara) and Forte di San Leo (in San Leo). There's much more to do: pause for some serene contemplation at Basilica di Santa Maria dei Servi Bologna, get your bearings at International museum and library of music, contemplate the long history of Complesso Monumentale San Michele In Bosco, and see the interesting displays at Museo per la Memoria di Ustica.

Take a train from Genoa to Bologna in 3 hours. Alternatively, you can drive; or take a bus. Traveling from Genoa in January, things will get little chillier in Bologna: highs are around °F and lows about °F. Finish your sightseeing early on the 27th (Mon) to allow enough time to take a train to Florence.
more less

Things to do in Bologna

You'll visit kid-friendly attractions like Cathedral of Santa Maria del Fiore and Basilica San Miniato al Monte. Take a break from the city and head to Bagno Rita and Bagno La Rondine. Explore Florence's surroundings by going to Castello del Trebbio (in Santa Brigida), Spiaggia Tirreno 2000 (in Calambrone) and Duomo di Pisa (in Pisa). Next up on the itinerary: explore the world behind art at Palazzo Strozzi, take in the spiritual surroundings of The Baptistery of St. John, take in panoramic vistas at Campanile di Giotto, and see the interesting displays at Pitti Palace.

For where to stay, reviews, other places to visit, and other tourist information, use the Florence trip site.

You can take a train from Bologna to Florence in 1.5 hours. Alternatively, you can drive; or take a bus. In January, Florence is somewhat warmer than Bologna - with highs of °F and lows of °F. Cap off your sightseeing on the 5th (Wed) early enough to go by car to Siena.
more less 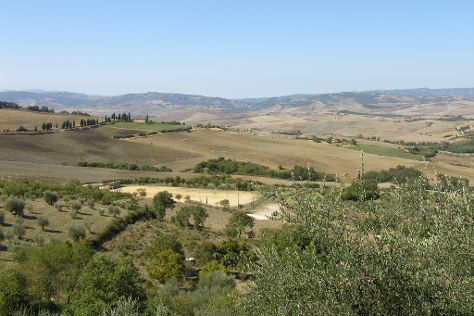 Get a sense of the local culture at Torre del Mangia and Duomo di Siena. Appreciate the collections at Palazzo Pubblico and Museo Civico and Archivio di Stato. Get out of town with these interesting Siena side-trips: Archeological Museum and Tomb of Hell's Quadriga (in Sarteano), Azienda Agricola Capanna di Cencioni (in Montalcino) and Abazzia di Torri (in Torri). And it doesn't end there: browse the collection at Biblioteca Piccolomini, pause for some serene contemplation at Chiesa di San Raimondo al Refugio, contemplate in the serene atmosphere at Battistero di San Giovanni, and steep yourself in history at Palazzo Salimbeni.

To find maps, other places to visit, where to stay, and tourist information, read Siena itinerary planner.

Getting from Florence to Siena by car takes about 1.5 hours. Other options: take a bus; or take a train. In February, daytime highs in Siena are °F, while nighttime lows are °F. Finish your sightseeing early on the 9th (Sun) to allow enough time to drive to Assisi.
more less 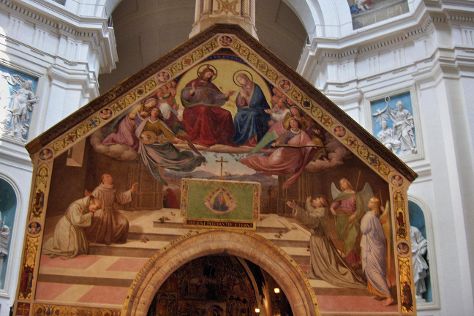 Rich in culture and religious tradition, Assisi is known as the birthplace of St.

You can drive from Siena to Assisi in 2 hours. Alternatively, you can take a bus; or take a train. In February, plan for daily highs up to °F, and evening lows to °F. Wrap up your sightseeing on the 16th (Sun) to allow time to drive to Rome.
more less

Things to do in Assisi

To find reviews, ratings, maps, and other tourist information, you can read our Rome trip planner.

Traveling by car from Assisi to Rome takes 2.5 hours. Alternatively, you can take a train; or take a bus. In February in Rome, expect temperatures between °F during the day and °F at night. Finish your sightseeing early on the 24th (Mon) to allow enough time to take a train to Naples.
more less

©
Naples is the capital of the Italian region Campania and the third-largest municipality in Italy after Rome and Milan. Museum-lovers will appreciate Galleria Borbonica and Museo delle Arti Sanitarie. Lungomare Caracciolo and Pompeii Archaeological Park are good opportunities to explore the local culture. Change things up with these side-trips from Naples: Abbazia del Goleto (in Sant'Angelo dei Lombardi), Rione Terra (in Pozzuoli) and Santuario di Montevergine (in Mercogliano). There's still lots to do: contemplate the long history of Catacombe di San Gaudioso, take in the architecture and atmosphere at Cloister of Santa Chiara, take a stroll through Chiaia, and make a trip to Via San Gregorio Armeno.

For maps, photos, and tourist information, use the Naples trip maker website.

Getting from Rome to Naples by train takes about 2 hours. Other options: drive; or fly. In February, daily temperatures in Naples can reach °F, while at night they dip to °F. Finish your sightseeing early on the 2nd (Mon) so you can travel back home.
more less

Things to do in Naples