Quebec's economic and cultural capital, Montreal serves as the province's major point of entry, known for its rich history and high standard of living.

Montreal is known for historic sites, parks, and museums. Your plan includes some of its best attractions: pause for some serene contemplation at Notre-Dame Basilica, explore the world behind art at Musee des beaux-arts de Montreal, don't miss a visit to Old Montreal, and pick up some local products at Jean-Talon Market.

To see maps, reviews, photos, and other tourist information, refer to the Montreal sightseeing planner.

Louisville, USA to Montreal is an approximately 8-hour flight. You can also drive; or do a combination of bus, car, and train. Traveling from Louisville in October, expect Montreal to be a bit cooler, temps between 58°F and 45°F. Finish your sightseeing early on the 11th (Fri) to allow enough time to drive to Quebec City.
more less

Things to do in Montreal 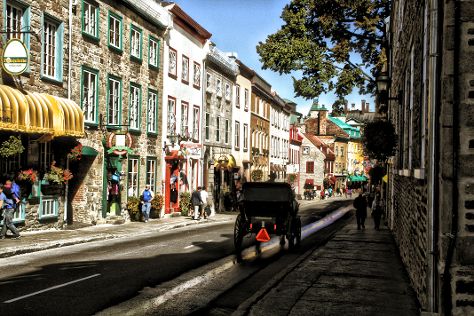 With a World Heritage-listed old town, Quebec City remains a walkable and safe hub of culture, commerce, and education offering a blend of fascinating history and a range of tourist-oriented activities.

Quebec City is known for historic sites, nature, and museums. Your plan includes some of its best attractions: wander the streets of Old Quebec, immerse yourself in nature at Parc de la Chute-Montmorency, appreciate the history behind Do Re Mi Fa Sol la Si Do Quebec, and visit Terrasse Dufferin.

To see maps, where to stay, more things to do, and other tourist information, use the Quebec City online journey planner.

You can drive from Montreal to Quebec City in 3 hours. Alternatively, you can take a bus; or take a train. In October, daily temperatures in Quebec City can reach 59°F, while at night they dip to 44°F. Wrap up your sightseeing by early afternoon on the 14th (Mon) to allow time for travel back home.
more less

Things to do in Quebec City